How I Ended Up Singing for Kim Possible 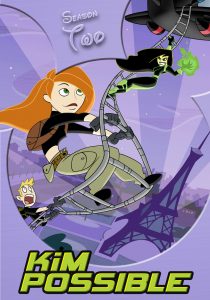 I grew up in the Thousand Oaks area of Ventura County and sang in Church where I met a good friend who was just starting his career as a music composer in Los Angeles. He ended up calling me and asking if I could sing like Britney Spears to which I replied yes. Honestly, I didn’t know if I could sing like her but I figured that I had enough determination to will it into place! I did some serious homework on Britney and listened to her voice with headphones turned up loud so I could catch her every nuance. I translated her voice as sounding like not a lot of space was inside her mouth while she was singing and that she had a hint of vocal fry to make certain words sound sensual. Her tone was also much more nasal and lifted than my natural tone was. So I did my research, I practiced for a day, grabbed my lip gloss so I could feel more like Britney and off I went to the studio.

At that time in life, my studio career was booming; I had so many sessions that day that I didn’t end up arriving to this studio session in Westlake Village until 1am to even begin singing the theme song for Kim Possible. The song had to be turned in by morning so the composers were willing to pull an all nighter so I could sing on it. Disney went crazy for the song and were considering keeping me on as the lead vocals, but later decided they wanted a known artist to sing the song to help draw fans into this new Disney Show. Thankfully, some of my background vocals (which was mostly harmony stuff) were left on the final version of the song with Christina Milian singing the lead.

Later, they came out with a Kim Possible Movie titled “So The Drama”. On the theme song, I was the featured artist with a James Bond type of spin. I was a featured artist on another song for the Kim Possible Soundtrack called “I’m Ready”. My friend who I had met while singing in Church composed all three of these songs.  He is a really good friend to this day and we’ve since worked on many other projects together.

There are many reasons why someone can be hired for a project, such as singing the Kim Possible theme song. Sometimes it’s because of an existing relationship where they know what you are capable of, or they believe in you enough to give you a chance. And sometimes you are a referral from a trusted contact. You never really know where your job will come from. Who knew singing in a Church in Thousand Oaks would help propel my singing career but it certainly did. So do everything with excellence, work hard, and practice more than you think you need to. Show up on time and be friendly with a good attitude. People will take notice and possibly hire you, or even recommend you for a job.